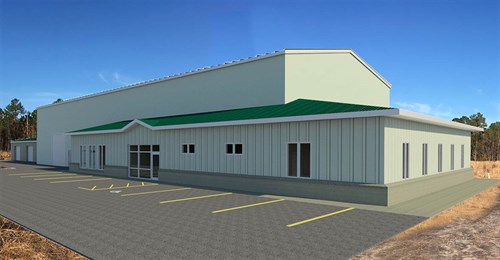 As we continue to take the necessary and proper steps towards ensuring our customers have high quality, low cost water for decades to come, we want to keep you informed on what is happening.

September 15, 2020:
The board voted unanimously to approve three contracts ($21,400,000.00 contract for M.B. Kahn Construction Company Inc. to build the RO plant, a $3,455,901.00 contract for Carmichael Construction Compay Inc.  to install lines and a river diffuser for the concentrate discharge to the Brunswick River , and $5,998,430.26 for raw and finished water mains built by Carolina Civil Works.)

May 18, 2020:
Judge Henry entered an Order granting the Joint Motion and ruling in favor of The Town of Belville and H2GO.  This ruling allowed Belville to return the assets of H2GO to H2GO and allow H2GO to resume construction of the much anticipated RO plant.

May 1, 2020:
The Honorable Charles Henry, Senior Resident Superior Court Judge, heard a Joint Motion that had been filed by Brunswick Regional Water and Sewer H2GO and the Town of Belville, asking the court to lift the stay on the current permanent injunction filed in July of 2019 that was preventing Belville from returning the assets of H2GO to H2GO and preventing H2GO from proceeding with the construction of the aquifer sourced RO plant.

November 5, 2019:
The board shifts to a 4-1 pro-RO majority with the election of Steve Hosmer and Barry Laub.

July 2019:
Superior Court Judge Charles Henry notified all parties in the H2GO case that he intended to enter a permanent injunction.

April 22, 2019:
The Town of Belville votes to appeal judge's decision.

December 13, 2017:
Brunswick County Superior Court Judge Thomas Lock orders things to remain as they were on November 28, meaning the Town of Belville remained the legal owner of H2GO’s assets, while H2GO continued to manage the utility.

November 28, 2017:
The board voted to sell its assets to the Town of Belville after the November election saw a shift in pro-RO board to an anti-RO board. The board felt this was necessary to keep the project alive and Belville served as custodians of H2GO's assets until the project could resume.

August 22, 2017:
The board voted on a resolution to transfer $5.7 million from three different funds to go toward paying $2.75 million to Carolina Civil Works and $4.66 million to State Utility Contractors Inc. to begin construction, with the intent to reimburse the funds once the financing is approved by the LGC. The resolution passed with a 3-2 vote.

July 18, 2017:
The board voted 3-2 to approve  five contracts ($16,995,000 contract for State Utility Contractors Inc. to build the RO plant, a $1,725,200 contract for TA Loving Co. to bury a concentrated discharge line to take brine water from the RO plant to the Brunswick River discharge, $4,622,400 for raw and finished water lines built by Hall Contracting Corp. and $2,755,346 for a regional pump station and force main on U.S. 17 to be built by Carolina Civil Works Inc.) contingent on approval of the Local Government Commission’s (LGC) revenue bond approval for a $25 million bond for construction of their Reverse Osmosis (RO) Water Treatment Plant.

The Board also voted 3-2 at the same meeting to refinance the bond through First Bank in Leland.

May 10, 2017:
The board voted 3-1 to approve $3,348,000 in contracts for the construction of wells and the procurement of plant equipment during a special meeting. Only two bids were received for the well construction. Skipper’s Well Drilling and Pump Service of Leland won the contract with a $1,634,000 bid. The bid process for procuring plant equipment had a few twists. One company was eliminated for not including sales tax while another firm was rejected for not following bid specifications for a pump. From the three remaining bidders, Harn RO Systems of Venice, Florida won the contract for $1,714,000. This put H2GO $650,000 under budget thus far.

May 8, 2017:
The North Carolina Department of Environmental Quality issued a National Pollution Discharge Elimination System permit to discharge brine wastewater into the Brunswick River from the plant. “Based on the review of the public record, written and oral public comments, the North Carolina General Statutes and Administrative Code, and discussions with other Division of Water Resources (DWR) staff, I recommend to the Division Director that the draft NPDES permit for the Brunswick Regional Water and Sewer H2GO Water Treatment Plant be modified and issued…”.  The primary permit modification includes a provision to implement a one-year supplemental monitoring program, to be coordinated with the UNCW Center for Marine Science, to verify mixing and dilution predictions established to ensure environmental protection of the river.

October 2013-February 2014:
Brackish concentrate, or reject water from RO plant operations are proposed to be discharged to the Brunswick River.  CORMIX is an expert rule-based system for the analysis, prediction, and design of discharges into water bodies, i.e., the Brunswick River.  Based on the receiving stream characteristics obtained from field investigations, and concentrate water chemistry, CORMIX predicts mixing and plume characteristics from the proposed outfall.

May 2012-June 2013:
Under GMA’s guidance, H2GO installed 4 test wells - two wells at our elevated water tank site, and two wells on Trade Street.  These locations were selected to provide a hydrogeologic cross section from southeast to northwest through H2GO’s service area.  At each test well site, one 4” well was installed 400’ deep into the Lower Peedee aquifer and one 4” well was installed 600’ deep into the Black Creek aquifer.  Pump tests were performed and water samples were analyzed from each well at each site.

March 2012:
The Water Supply Feasibility Study was completed and determined that no additional supply allocations from LCFW&SA were available to pursue surface water supplies and treatment; that sustainable and treatable groundwater supplies from the Lower Peedee and the Black Creek aquifers underlie the H2GO service area; and that preliminary cost comparisons indicate brackish groundwater supplies with RO treatment are favorable over continued purchase of wholesale water from BrunsCo PU.